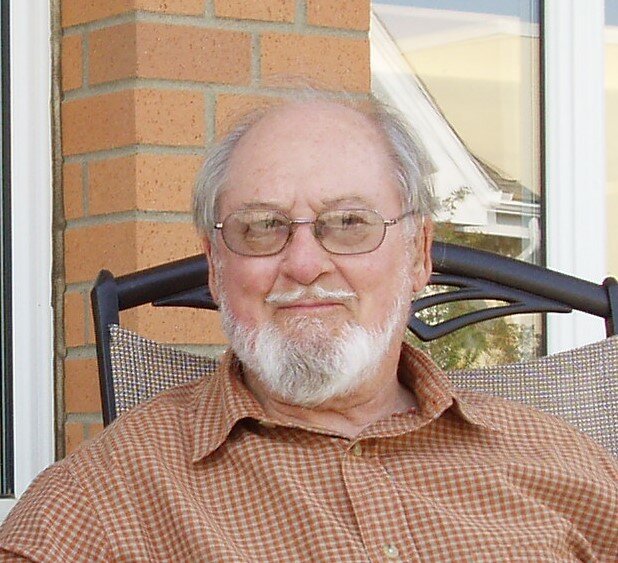 Passed away in Orangeville in his 99th year Ron is survived by his children Lynne (Brian), Mark (Joy), Guy (Hilarie), 11 grandchildren and 13 great- grandchildren. Ron was born in Plymouth, England to Harold and Winnifred Staughton.

During WWII Ron served with the RAF as a radar operator and during this time met his future wife Ruth Calow who was also serving in the RAF. During the war Ron studied to become an architect through correspondent courses. In 1946 Ron and Ruth married and after sitting several exams Ron qualified as a member of the Royal Institute of British Architects in 1953. In 1954, with 2 small children, Ron and Ruth immigrated to Erindale, Canada where their third child was born. Ron then studied and qualified as a member of the Royal Architectural Institute of Canada in 1963.

After living and working in Mississauga for many years Ron and Ruth upped stakes and moved to Calgary in 1980 where they enjoyed many volunteer opportunities, activities, parties and extensive traveling. They were active participants at the Unitarian Church of Calgary as they had been at the Unitarian Congregation of South Peel before their move. At the time of his death Ron had been a member of the Rotary Club for 58 years.

Ron used his retirement years to keep active in squash and later paddle tennis. He also took up jewelry making and sculpture in various mediums including casting in bronze.

Ruth died in 2013 in Calgary and in 2016 Ron decided to move back to Ontario to be closer to family. He moved into Montgomery Village Retirement Home in Orangeville where he enjoyed the last six years of his life.

Ron lead a long and full life and will be sorely missed by his family.

In Memoriam Funeral Services Inc. has been given the honour to serve the Staughton family.

Share Your Memory of
Ronald
Upload Your Memory View All Memories
Be the first to upload a memory!
Share A Memory