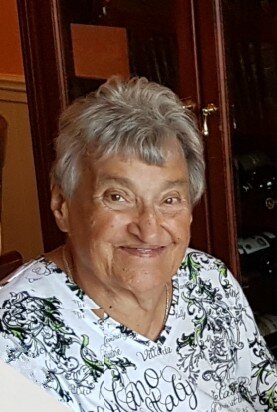 Please share a memory of Anna to include in a keepsake book for family and friends.
View Tribute Book

It is with very heavy hearts that we announce the passing of our beloved Mother and Oma.  Anna passed away peacefully on Monday July 11, 2022, at the age of 95, in the presence of loved ones, following a short illness. She was predeceased by her husbands, Bruno Lange Sr. and Bernie Rohler and by her daughter Mary-Anne Kellie.  Anna leaves behind her two loving daughters Elisabeth and Angela (Ian), her son Bruno (Mariel), and grandchildren Robbie, Cathie, Kyle and Sarah-Anne. Anna will be sadly missed by both her Canadian and German families and friends. She will also be greatly missed by her great grandchildren, Austin, Kestrel, Lane, Willow and Aurora with whom she so enjoyed to play, cuddle and tell stories.

Our mother Anna was born in Oberau, Germany in an incredibly picturesque region of Bavaria. She was very proud of her village and roots, but in 1954 Anna left Germany to join her husband who was already in Canada preparing for a new life for his family.  Arriving at Pier 21 with the very young Elisabeth and Bruno, Anna travelled by the immigrant train to Toronto where Bruno Sr. was waiting for her. After settling in Toronto, they had their two other children, Angela and Mary-Anne.

Anna was a very intelligent person who regretted that she could not pursue a secondary education because of the times in which she was born. This did not stop her from pursuing a career and taking night courses. She was able to obtain a position as technical librarian at Wardair Canada, where she controlled and updated all the manuals for repairing the Wardair fleet. Always busy and happy to help any time of the year, she took care of the plants in the hangar, decorated the offices at special times of the year and even hemmed pants which were part of the work uniform. Indeed, Wardair personnel became her second family and have remained in contact with her since her retirement 30 years ago. They even hosted her 90th birthday celebration at the Brampton Flight Center and Flying Club in 2016.  She was proud of the fact that her children had pursued a post-secondary education and had successful careers.

Our mother had a fondness for older movies that had positive and happy endings, films starring the likes of Bing Crosby, Ingrid Bergman and James Stewart.  One of her favorite films was the “The Bells of St. Mary’s” and she especially loved the scene where Father O’Malley played by Bing Crosby quoted the following saying to an old and wealthy developer:  “I shall pass this way but once, if there’s any good I can do for anyone, let me do it now and not put it off for I shall not pass this way again”.  Our mother lived her life as a testament to these thoughtful words of guidance.  Any good she could do for someone she did.  Always.

Mother was always greatly loved and admired.  Her life was one of duty and responsibility to her husband, children, and the wonderful country of Canada, which accepted her as a proud and contributing citizen. It was not always an easy life, but it was rewarding, nevertheless. She loved to travel and explore new places, to work in her garden and grow her orchids, to read and get into discussions about philosophical topics, to sew and knit at which she was an expert, to keep in contact with her German friends and family and especially, to help others either personally or through charities. She was truly a remarkable woman who will be missed greatly.  Always in our hearts and thoughts, she will be with us always.

Anna was, what a family friend referred to as, a “rock”. Firm, loving and fair, we remember all the love, encouragement, wisdom and hopes that she modelled for us throughout all of our years together. God's compassion is a great gift to us as we continue to trust in Him throughout our earthly journey. The family appreciates everyone’s sympathy at this difficult time and are keen to remember the rich memories of our mother and grandmother. She had an incredible and rewarding life and whilst she is no longer here with us, her love and spirit are forever with us.

As expressions of sympathy and in lieu of flowers, donations in memory of Anna may be made to the Aktion Deutschland Hilft charity (https://www.aktion-deutschland-hilft.de/en/), which is an umbrella organization supporting 23 charities including World Vision.

In Memoriam Funeral Services Inc. has been given the honour to serve the Lange Family.

Share Your Memory of
Anna
Upload Your Memory View All Memories
Be the first to upload a memory!
Share A Memory