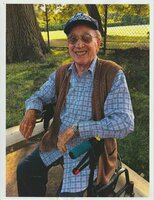 On June 9, 2022 Alfons Zwara loving husband of Cecylia, father and great-grandfather passed peacefully at his retirement home in Mississauga at the age of 101. Born in Koscierzyna, Poland to Leon and Franceska Zwara, on April 24, 1921. Alfons grew up with his parents and grandparents and his 7 siblings in rural Poland on a farm. When he was young, his Grandmother had predicted that he would see many countries, travel far from home and live a very long life. All his grandmother had predicted - came true. Dad was taken at the young age of 18 to serve in World War II. He eventually escaped to the Armia Andersa and after serving there, ended up in England. He served in Italy, France, and North Africa, disarming and detonating mines and was in Great Britain at the end of war. He had stories of his life in the war and told us how scarce things were and his adventures of smuggling slabs of butter to his parents while on leave from the army. He traversed many other countries until the opportunity to immigrate to Canada came. Dad had a professional driver’s license in a time when there were not very many motorized vehicles to be seen. Dad arrived in Canada in 1948, with a contract to work on a farm near Orangeville. He went to English school and found his way in this new country with friends from his travels. The Polish community embraced its emigrants and Dad found his social contacts expanding. At a New Year’s Eve dance in 1950, he met our mother Cecylia, and they were married in 1951. They would have been celebrating 71 years of marriage this year. He and Mom had a very active social circle participating in the Polish Alliance groups in New Toronto and on Davenport in Toronto. Dad and Mom enjoyed travelling, they went to Poland several times and enjoyed travelling. They continued to visit many more countries, - Spain, Portugal, and Cuba. They travelled across Canada seeing the west Coast and British Columbia. They saw much of the United States through its coasts up and down Florida and California. Dad provided us with a cottage near Wasaga Beach in Collingwood that we all enjoyed being at. Many friends came to stay, sleeping on just about any horizontal surface. The cottage was tiny with electricity and a pump out back. Dad created a garden in which he grew all kinds of flowers, and gigantic harvests of vegetables. As seasoned farmers a lot of what was grown went into preserves that were on the family table over the winter season. Dad worked at Alcan Aluminum, Canadian Coleman Company and lastly was employed by the Province of Ontario, working at the Provincial Courthouse on University Ave. in downtown Toronto. He retired at age 65 only because it was mandatory and he and mom returned to Grand Valley near Orangeville to be a gentleman farmer. There he continued with his fabulous and abundant gardens and raising his own chickens with his dog Rusty at his side. We always had a supply of fresh eggs and vegetables of our choosing to take home when we visited. Dad never wasted money on things, was frugal and always provided for his family. He had a good pair of shoes that he loved and kept getting them resoled rather than buying a new pair. Those shoes are still in his closet today. Dad had many, many stories to tell of his 101 years of life from the very sad to hilarious. The war was etched into his life and he had many tales of surviving under the worst circumstances as well as the more mundane ridiculous everyday stories about life after the war that had us entertained and laughing. Dad loved Canada. His heart was full of gratitude for the opportunities of work and liberties to provide for his family. Canada’s flag was a cherished symbol for him. Dad leaves Cecylia loving wife of 70 years, his children Suzanne, Steve (Diane), Joe (Louise) Karen (Dave), and grandchildren Jessica, Sarah, Adam, Jennifer, Crystal, Stacey, Carole, & special Brenden, great- grandchildren Mila, Penelope, Abbey, Austen, Caleb, Caitlin, Gavin, & Mackenzie. It is with much love, and appreciation for everything Dad has done for us, his children, that we will celebrate every day with thankfulness and gratitude for the lessons learned from him. Dad always knew his rock, our Lord and Saviour Jesus Christ and knew when the things of the world faded in whose loving care he would be. Good Bye Husband, Tata, Dziadek. Till we meet again, all our Love, Rest In Peace In Lieu of flowers, donations to Wawel Villa Seniors Residence, The Home with a Heart, would be appreciated. A private family funeral will be held on Thursday June 16, 2022 at Township of East Luther Grand Valley, Grand Valley Union Cemetery. A Celebration of Life will take place on Saturday June 25th, 2022 at daughter Karen Zwara’s home in Oakville (192 McCraney Street W, Oakville, ON, L6H1H7). Please RSVP by texting either Suzanne-905-338-3482 or Karen- 905-467-1731 if you wish to attend. “Proclaim that all mankind are like grass; they last no longer than wild flowers, Yes grass withers and flowers fade, when the Lord sends the wind blowing over them, people are no more enduring than grass. Yes, grass withers and flowers fade, but the word of our God endures forever.” Isaiah 40:6-8 Online condolences may be made at www.imfunerals.com In Memoriam Funeral Services Inc. has been given the honour to serve the Zwara Family.