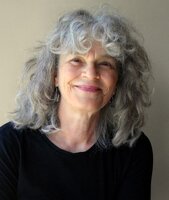 We are sad to announce the passing of Rosemary Molesworth (nee Ulch) 1950 – 2022 of cancer. She was predeceased by her parents Alex Ulch and Margaret (nee Lougheed) Ulch. Rosemary grew up in Simcoe, Ontario and attended Queen’s University where she earned a BA and a BEd. A shared balcony in the Science 44 Co-op in Kingston introduced her to Hugh Molesworth and led to marriage in 1975. She taught high school art for a year in Orillia but returned to Kingston to supply teach, join the Kingston Potters’ Guild and find her vocation. A Diploma in Ceramics from the Sheridan School of Crafts and Design was followed by a two year position at the Harbourfront Studios as well as valuable experience working for potter Bob Kavanagh. Hugh and Rosemary moved to Shelburne in 1983 and she opened a studio but another move to the country allowed for much better facilities and space to practice and refine her art and move through a variety of styles and forms, often inspired by her travels. Recognition and appreciation grew steadily and countless art shows, several awards and inclusion in galleries such as The Guild Shop, The Gardiner Museum and the McMichael Gallery attest to her abilities. Rosemary was instrumental in the organization and success of ‘Quintessential’, an annual showcase of the work of 5 women artists from the Dufferin area and produced a yearly “Sale at Home” that was eagerly anticipated by many for the art and its party atmosphere. She served on committees that focused on showcasing the work of local artists and was a long term member of a writing group that produced “Voices” which highlighted work by each writer. An enthusiastic reader, Rosemary was a strong supporter of the local Library and worked there for several years as a part time employee. Hugh and Rose loved living in the house they built near Shelburne, enjoyed watching the fallow farmland they bought become a forest through planting and care and experienced the joys of sharing it with the wildlife that found a home there. They traveled extensively, enjoying especially the round the world trip of 6 months they took in 1995 as well as trips to Europe and across Canada. The friends they made around the world and the many that they embraced at home will miss her enthusiasm, hospitality and warmth. The family would like to express their gratitude to the staff and volunteers of Matthews House for their extraordinary care and compassion. In lieu of flowers, donations to Matthews House Hospice or the Canadian Cancer Society would be appreciated. Online condolences may be made at www.imfunerals.com In Memoriam Funeral Services Inc. has been given the honour to serve the Molesworth Family.